You are Visitor No

1) Edpidemic occurs in this world every 100 years. This time it is 2020. Previously it was on 1920, 1820 and so on.
2) Covid 19 Virus cannot survive in soap water so keep washing your hands every hour with soap water for at least 20 seconds.
3) Sanitizers can be used outside home to sanitize your hands to keep them germ free.
4) Many people are locked down at a city away from their hometown and do not know when they will be able to return to their hometown.
5) WFH is the New Normal for employees who can WFH. (Work From Home)
6) Wash your fruits and vegetables with Warm Water before cutting them so that any germ outside them can be killed by hot water.
7) People buying alcohol from wine shops have a great role to play in the economy of any country.
8) A person can survive without junk food at home with home food at long as he tries.
9) Keep social distancing with people outside your home to stop spread of virus.
10) Avoid public places like shopping malls, stadiums, parks, markets, roads, to avoid spreading of Virus.
Posted by Vaijayanta Chattoraj at 1:02 AM No comments:

79055 visitors
Posted by Vaijayanta Chattoraj at 9:57 PM No comments:


For Pune Wedding Shoot click on the below links: -

Posted by Vaijayanta Chattoraj at 2:49 AM No comments:

If you are a big fan of the cute scooter.

73982 visitors
Posted by Vaijayanta Chattoraj at 11:12 PM No comments:

Back after a long time

After long days I am back to blogging. From now on I shall share my experiences here regarding my interaction and association with individuals around me.

Hope you all read about yourself here.

Guess why the industrial city of Chittaranjan was constructed on Bengal - Jharkhand (then Bihar) border?

Ans: It was to capture people and resources of both states to the factory. Hard working workers from Bihar and brilliant officers/managers/engineers from Bengal. Also it was there to capture the proximity to Kolkata port and rest of India  and big cities of India like Patna, Ranchi, Varanasi, Bhopal, Jabalpur, Delhi and so on. The unique thing about Chittaranjan is that the industrial town lies in Bardhhamaan district of Bengal while the station of the town is situated in Jharkhand called Mihijam in Jamtara district.
Posted by Vaijayanta Chattoraj at 2:34 AM No comments: 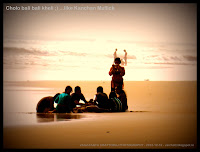 PLAYING WITH SAND @ PURI, BAY OF BENGAL
(click on the image to view original image)
Visitors: 69900
Posted by Vaijayanta Chattoraj at 2:03 AM No comments:

Mr. B. S. Bhosale is threatening me

Mr. B. S. Bhosale, the owner of B-302 Heliconia, Phase I, Magarpatta, Pune, MH (he stays at Majhi Sainik Nagar, Pune, MH now with his wife and children) is threatening me to pay him Rs 5000. He is threatening to pay him the money else I shall have to face dire consequences.

He is the owner of the flat where I used to stay earlier and he has received rent of Rs 13K for 11 months before Aug 2012 and 15K after Aug 2012 till Oct 2012. He had driven me out of his flat with 5 days short notice. He had paid me back the deposit money of 40K but now he is asking for more money from me.

He has threatened to pay him the money else I shall have to face dire consequences. If anything happens to me or my family or any of my property, Mr. B. S. Bhosale will be responsible for that and he should be arrested and executed for that by the Indian Police and Honourable Court of Law.

67646 visitors
Posted by Vaijayanta Chattoraj at 3:09 PM No comments:

How to tackle criminal activities in Salt Lake City Kolkata?

To solve the criminal activities in Salt Lake City Kolkata there are very few simple steps the government can take. They are: - 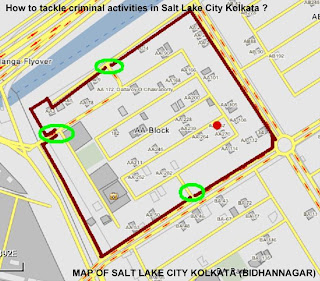 If these measures are taken proactively then the day is not far when stealing of necklaces, precious items, mobiles from morning walkers and burglary of houses in Salt Lake would be a thing of past.

Note: These measures are taken in Magarpatta City, Pune where I currently live and the security system here is a model system for all the complexes all over India to follow.

62886 visitors
Posted by Vaijayanta Chattoraj at 6:04 PM No comments:

Just like Bangalore and many other upcoming cities, Kolkata should have 2 ring roads. One Outer Ring Road and one Inner Ring Road (as shown in the photo below)

The inner ring road should be 2 X 2 lane which should be elevated as flyovers across the city  for smooth movement of traffic. This road should meet other roads at 10 important points and that too in a scientific manner so that the traffic movement in not hampered.

The outer ring road should also be elevated at places where there are lot of traffic and it can be at ground level now but should be planned to be elevated in future so that the traffic moment in not hampered.

See the photo below to see the places of Kolkata where the outer ring road and inner ring road should pass.
Hope this is implemented soon. 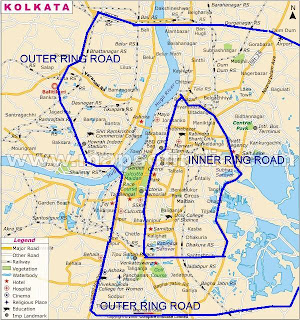 59363 visitors
Posted by Vaijayanta Chattoraj at 2:57 AM No comments:

See The World Through Vaijayanta's Eyes

The other Blog of Vaijayanta

Vaijayanta Chattoraj
My name is Vaijayanta Chattoraj. I'm a simple guy. Simplicity is my identity. I like to dream a lot. I'm working hard to make my DREAMZ come true. I am a Software Engineer by Profession. I am also an MBA in Systems. By passion I am a singer, a blogger and a photographer. You can catch me up at vaichatt@gmail.com